Apple Will Release iPhone Mini In The Year 2016

Apple Will Release iPhone Mini In The Year 2016 | A leading analyst claims that Apple will release an iPhone mini 4-inch screen at the beginning of next year. The gadget is believed will have a colored metal casing, but do not use 3D display Touch like that will be used iPhone 6s and 6s plus. KGI Securities analyst, Ming-Chi Kuo claims it will be followed later in the same year by the iPhone 7 and iPhone 7 plus.

iPhone Mini has a 4 inch screen and also has a A9 chip manufactured by TSMC and Samsung, as well as have a glass with curved edges like iPhone 6s. Has three color options, as well as the specifications of the camera are the same as the iPhone 5s where 8 MP rear camera and 1.2 MP front camera. This new model probably will not generate huge sales, but Apple had his own reasons for launching the gadget. "We estimate 15-17mn iPhone 4 inches will be delivered in 2015. It is predicted that the iPhone 4 inches will reach 8-9% of the total sales of the iPhone in 2016. With a price of around US $ 400-500 or the equivalent of 5.2 million hinga 6 , 5 million, is expected to penetrate emerging markets and consumer medium. 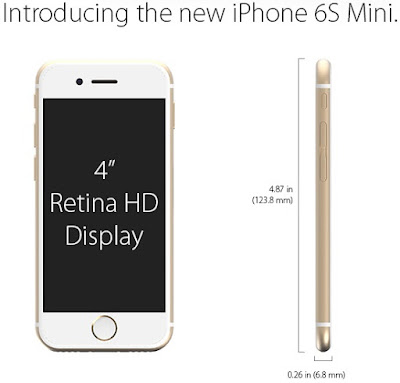 "In order to make IOS 9 or IOS 10 running smoothly, Apple may adopt A9 chip for smartphones" said Ming-Chi Kuo. He also predicts the iPhone 7 will have a new, faster processors and larger and will have 1GB of additional RAM to distinguish both the mobile phone.

Reporting from dailymail, the addition of 3D Touch gives Apple ways to remove the home button and use the empty space to create a larger screen or make the device smaller. If yes means Apple will move the Touch ID sensor to another position.

Apple may also be focused on battery life for this new smartphone. 'Looking at the Mac over the past few years, Apple has improved battery life up to 10 hours. Battery life is one which should be improved as well as one that may be most welcomed by customers. Apple previously said it would launch the iPhone 7 super thin.

Ming-Chi Kuo reinforce the notion by saying, iPhone 7, will be launched in September 2016 and will be the thinnest Apple gadget with a thickness of only 6 mm. This thinner iPod Touch that has a thickness of 6.1 mm.