Mecca Presents the World's Largest Hotel with 10 thousand rooms | As in the previous article I have ever written about The World's largest hotel is located in Saudi Arabia, namely Abraj Kudai and will be opened this year. Hotel named Abraj Kudai has 10,000 rooms, 12 towers, 70 restaurants, convention hall, and a helipad on the roof of the hotel. The hotel is located one mile from the south of the Grand Mosque, the hotel has a vast 1.4 million square meters. Thus was launched from telegraph.co.uk (Friday, 01/20/2017).

Abraj Kudai inspired architecture building model traditional desert fortress. The building looks grand and luxurious with super large dome and tall towers. Irfan Al-Alawi, who is director of the Islamic Heritage Research Foundation based in the UK, he describes Abraj Kudai as part of a massive development of the city of Mecca is a city that began full of stately buildings of skyscrapers. Irfan Al-Alawi call it the Mecca-Hattan and associate it with a Manhattan in New York. 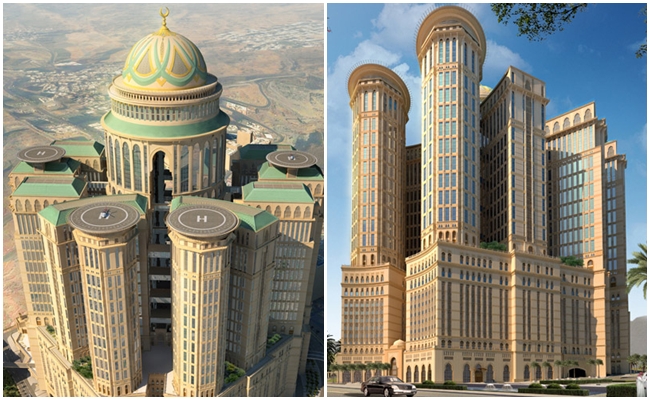 "Everything has been wiped out incessantly as part of a development project luxurious hotels, regardless of historical value and sanctity of places around the Grand Mosque" said Arfan Al-Alawi told The Guardian.

"These are the last days of Mecca. Haj worship will be filled with ease and elegance, but it seems that experience closer down the Las Vegas experience. "

In addition to Abraj Kudai, in Mecca itself has been there Abraj Al-Bait that includes the third tallest in the world. Height reaches 601 meters. Equipped with a large hotel, the biggest clock in the world, prayer room enough for 10,000 worshipers, and five supermarkets.

Hotel Abraj Al-Bait overshadowing the the Grand Mosque is the most expensive cost hotel which is about 65 million per night. Other luxury hotel development project is the construction of Jabal Omer Complex, which consists of 37 towers.

In his book, Mecca: The Sacred City, Ziauddin Sardar describe two differences Mecca. One of Mecca as a metaphysical destination, where many pilgrims seeking the essence of worship. And the second Mecca as a place full of luxurious hotels. Presumably the Saudi government bemaksud provide the best service for pilgrims, although the intention is then to change the face Mecca became the metropolis where buildings compete to be the highest.