Features and Changes on "Android O" | Android will soon have the latest version of "Android O". Many new features and some changes in the Android O than previous versions. In this article we will discuss thoroughly all the things about Android O. You can also see the release schedule for Android O, as in the image below.

Android O will be Android 8.0. Google has made a schedule for each launch preview with priview developing both in mid-May, possibly to coincide with the Google I/O, which is the third in mid-June and the fourth in mid-July. Public version of Android 8.0 will be released to support the Pixel devices, Nexus and Android One, most likely in late August or early September.

1. Notifications Shade
When you slide down the notification bar you'll see a visual change in the Android O. toogle Strip at the top notification bar now takes a little more space on the screen and there was a bit of a re-ordering of toogle on Android O that has existed since Nougat.

In addition to the shortcut to the settings menu and Quick Settings, you can now see an icon Wi-Fi and cellular connections as well as the battery icon and the rest (which is displayed next to the battery icon).

For notifications themselves, they look the same as in Nougat, complete with bundled notifications and quick reply. If you have several notifications, small icons for each notification appears in a horizontal line at the bottom.

2. Notifications Handling
As for the handling of notifications, there are some familiar things happen as well as some new options. If you long press on the notice you will see a toggle for Notification, which allows you to disable all subsequent notice of the application in question.

However, if you swipe the notification to the side, you will get two icons: one for accessing the Notifications toggle and clock icon to turn off notifications for a while. If you touch your clock will automatically suspends for 15 minutes but you can open the drop-down menu to pause for 30 or 60 minutes, or turn off snooze.

3. Quick Settings
When you open the Quick Settings screen, you will see that Android still has a different color scheme for Pixels compared with Nexus devices. Nexuses has a background dark blue-gray with aqua accents while Pixel maintain near-black scheme and bright blue accent.


Viewed from the Quick Settings itself, Google has changed a few things. On Android O, the Quick Settings icon at the line (Wi-Fi, cellular, Bluetooth, Do Not Disturb) has a double function. You can tap on the icon to toogle on/off, but if you press the toggle below it, you will open the settings menu Mini instead.

4. App Badges
Android O finally added native support for App Badges. App Badges are the numbers that appear on the application icon to display the number of unread notifications. Of course, you will have full control over this with a toggle in the notification settings of individual application.

5. Menu Settings
Menu Settings is the part where most of the visual changes in the Android O. For starters there is a new color scheme: either Pixels and Nexus devices get a black and white approach but you'll still see a blue tone.

Settings menu there is also a bit of an overhaul. The big change in the Android O is that the Settings menu is much shorter than in Nougat, no more categories such as "wireless and networks" "device" "system" and "personal". In contrast, Android O has a more descriptive like "networks and the Internet", "connected devices", "apps and notifications" and "security and screen lock". 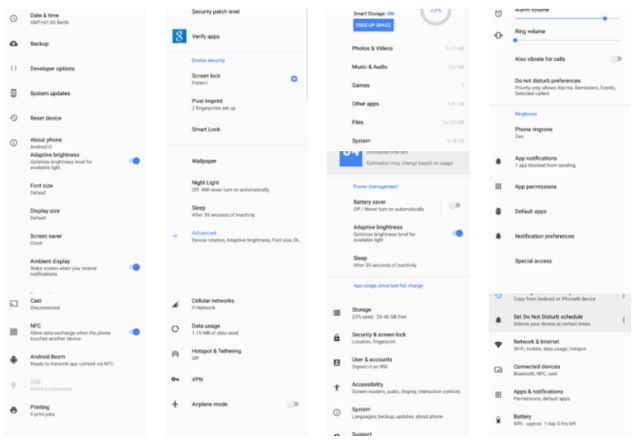 6. System UI Tuner
Such as nougat, you can activate the UI system tuner to tweak certain things in Android O according to your personal preferences. To activate the UI Tuner, swipe down the notification bar or the Quick Settings and long press the Settings icon. You will see it spin and feel the vibration when the options have been added to the Settings menu.

7. Status Bar
On Android O, System Tuner UI can now be accessed in the Settings> System. Contains four fields (for now): the status bar, do not disturb, navigation bar and lock screen. Status bar still provides a list of toggle to enable or disable the icon you see in the status bar, so you can remove the Bluetooth icon or hotspot persistent if you want. 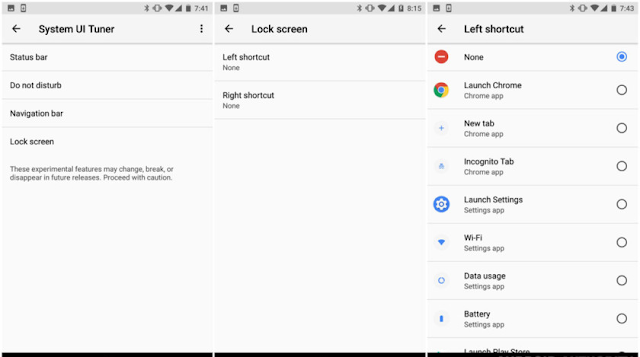 9. Navigation Bar
Next up is the navigation, which adds a lot of cool options in the Android O. There layout option that lets you select between normal, compact, left-leaning or right-leaning (which will be useful on a large device). 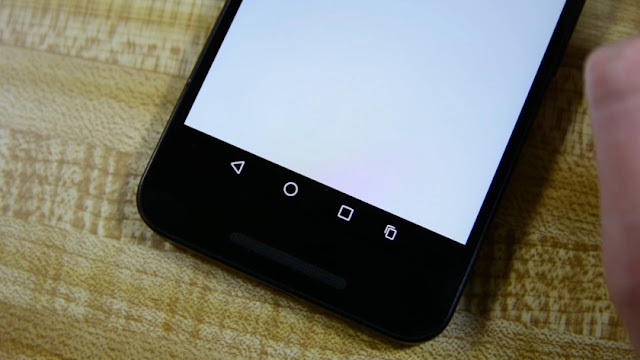 You can also add additional buttons on the left and right navigation buttons on the screen. You can choose from the clipboard, keycode or keyboard switcher. Clipboard allows you to save things to the clipboard and then simply drag of a button on the nav bar anywhere you want to drop: a very useful trick to email, phone numbers, and other items that are often inserted a copy.

10. Picture-in-picture Support
As Android TV, Android O will provide full support for the mode, picture-in-picture. You are already used to this in the YouTube app, which videoterus playing in a small floating window with while you navigate to other areas of application or different applications.

11. Audio
LDAC codec Sony donate them to Google for inclusion in Android O. That means if you have Bluetooth headphones come with LDAC, you will get better quality in Android 8.0. But not only LDAC, Android O also has support for APTX and APTX HD as well as SBC and AAC. There are also settings for audio sample rates and bits per sample as well, plus Android O added AAudio native APIs for applications that require high accuracy, low latency audio. 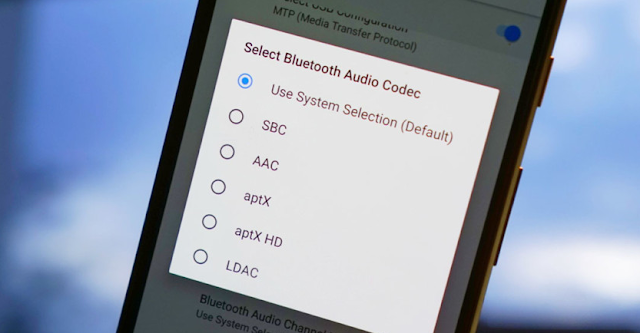 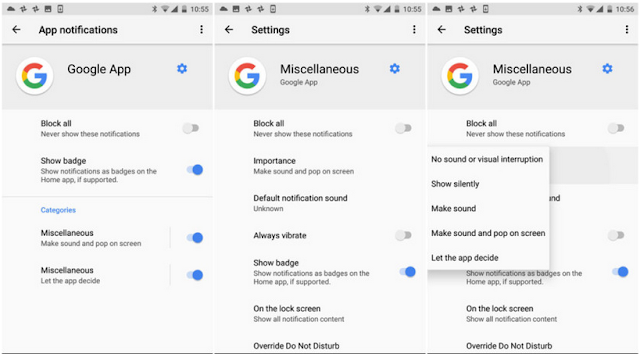 13. unknow Resource
Adding applications from anywhere outside of Google Play usually require you to go to your security settings and enable Unknown Sources. Now you also have to give permission for the application you use to download the APK.

For example, if you want to download the APK via Chrome, first you will be asked to give permission Chrome to install other applications through "trust apps from this source" switch at the special access of applications and notifications settings. You only need to do this once per application yet and you can always revoke permission at a later date. 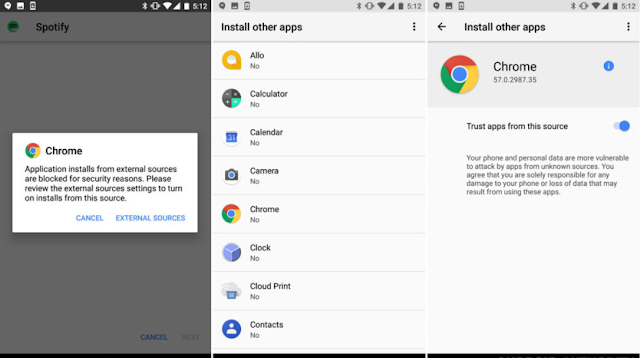 14. Background Process Limit
Android O will severely limit background processing application activity. Google has optimized the Android to limit the amount of usage to drain the battery and resource usage of applications that are allowed to run in the background. As we've seen lately, advanced users will have control over exceptions to this rule, but in general, Android O will greatly limit the process to the background.

15. Adaptive Icon
Adaptive icon is a solid way to say that Google tried to tidy up the mess of inconsistent application icon on Android. They basically provide application developers with multiple templates for each icon that adapt to their devices. So if the shape of the default icon for your mobile application is a round square then that's what you see across the board.

16. Autofill API
Autofill APIs introduced in Android O just trying to help applications manage passwords and form data which was better than the previous versions of Android. As Google notes in his blog post, "Users can choose from autofill applications, similar to the way they choose Keyboard application. Autofill and secure application store user data, such as address, user name, and even passwords ". We had to wait a while until the application developers make full use of the API Auofill on Android O, but we should see the password manager is much more capable in the future.