Train with Hello Kitty theme arrives in Japan | There are two things that will never age in Japan, namely Hello Kitty, the adorable character of Sanrio's creation and the bullet train or better known as the Shinkansen. Uniquely now both will be present together.

Aimed at revitalizing regional communities in western Japan, the Hello Kitty train will stop at every station between Shin-Osaka and Hakata, the area in Fukuoka city in Fukuoka prefecture of western Japan. 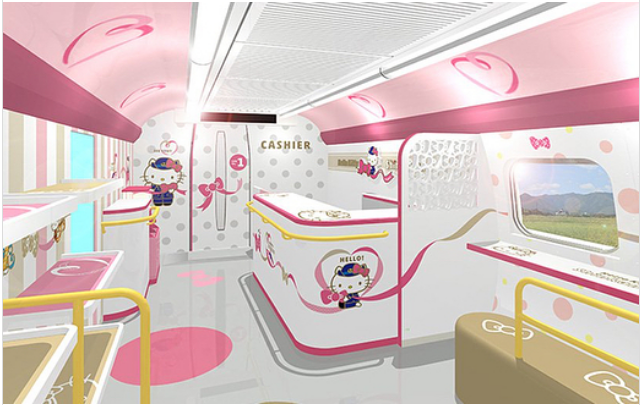 The 2nd carriage is named Kawaii where the floor, window, headrest and arm of the chair and the whole room are covered with Hello Kitty and Friends motifs. There will also be a photo booth featuring Hello Kitty dolls in Shinkansen uniform.

Instead of the usual jingle Shinkansen, the trains will sound original Hello Kitty theme as it approached the station.

While one carriages is named Hello. This area will feature exhibitions featuring regional products and attractions. Passengers can buy souvenirs and special products here as well. The first area highlighted was Sanin, home to the prefectures of Shimane and Tottori.

Eight original Hello Kitty designs have been unveiled where each Hello Kitty holds a local product representing each prefecture. For example, there are green apples for Tottori prefecture and black shell for Shimane Prefecture.

Other prefectures to be featured include Osaka, Hyogo, Okayama, Hiroshima, Yamaguchi and Fukuoka.

For tourists who are interested to try this Hello Kitty themed train, you can see the itinerary on the official site of Hello Kitty Shinkansen. Passengers can catch a train with regular train tickets that have been purchased before the day of departure or on the day of travel.

Hello Kitty Cafe has also opened on June 1, 2018 as well as a souvenir shop that opened the day before. This store will sell exclusive merchandises related to Hello Kitty Shinkansen and will open at Hakata Station.