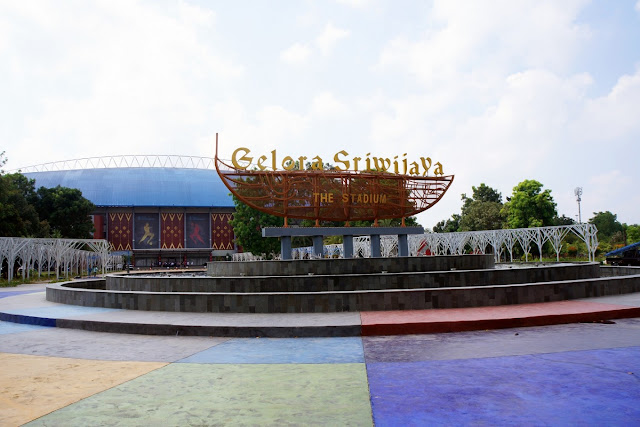 With the 2018 Asian Games just around the corner, all eyes are on the Gelora Bung Karno sports complex in Jakarta and Jakabaring Sport City (JSC) in Palembang, South Sumatra. Once a quiet area, Jakabaring has been busy gearing up for the largest multisport event in Asia, which will run from Aug. 18 to Sept. 2.
The stadium, also known as Gelora Sriwijaya, will host various competitions, such as climbing, soft tennis, beach volleyball, rowing, women’s football, as well as roller sports such as skateboarding and much more. However, the modern sports complex does not only provide sporting facilities, but also some interesting tourist attractions.
Here’s our guide for both domestic and foreign tourists looking to stay in Palembang for the 2018 Asian Games.

The Wyndham Opi Hotel Palembang is a 15-minute walk from Jakabaring Sport City, making it convenient for those who want to watch the Asian Games. Alternatively, visitors can also stay at Palembang’s city center, locally known as Seberang Ilir.
Budget travelers can book a room at All Nite and Day Hotel on Jl. Veteran, a newly opened hotel surrounded by restaurants and food stalls, located only a 15-minute drive from Jakabaring. Meanwhile, the Arista Hotel Palembang on Jl. Kapten A Rivai is also available for those wanting to be surrounded by five-star facilities.

Pempek or mpek-mpek (fish cake served with sour and spicy sauce) is Palembang’s most popular traditional dish. Tourists can find a myriad of pempek sellers across the city, offering different takes on the dish, such as kulit (skin fishcake), kapal selam (fish cake with egg), adaan (ball-shaped fishcake) and lenjer (long cylindrical fishcake), starting at only Rp 4,000 (28 US cents) per piece.
Pempek Vico, Pempek Beringin, Pempek Nony, Pempek Tince and Pempek Candy are among the city’s most popular pempek sellers. Tourists can easily find their outlets at the Palembang city center.
In addition to pempek, pindang patin and brengkes patin tempoyak are among the must-try fish-based dishes. The former is cooked with pineapple, creating a refreshing sour flavor. As for the latter, the fish is wrapped in banana leaves with various spices, including durian, creating sweet and spicy flavors.
Try pindang patin and brengkes patin tempoyak at Riverside Restaurant and Sarinande. Riverside restaurant is located on the Musi riverside and is popular for group dining. Meanwhile, Sarinande is situated on Jl. Mayor Ruslan. Founded in 1957, Sarinande is known as a go-to eatery for traditional Palembang cuisine.
If you’re looking for non-halal food, drop by Bakmi 888 and Bakmi Aloi. The former serves lomie (noodles with sticky gravy) with generous toppings of pork, prawns and mushrooms. Meanwhile, Bakmi Aloi is a legendary noodle sellers in Palembang and is usually crowded during breakfast.
If you happen to be a foodie, you might want to try noodles at Terang Bulan. The restaurant is known for its strict owner who would not hesitate to ask you to leave if you cannot wait. Terang Bulan is located on Jl. Mesjid Lama and opens from 4:30 p.m. to 8 p.m.
Meanwhile, halal noodles are available and a must-try at Sari Rasa Bakmi Ayam. Located on Jl. T. P. Rustam Effendi, the noodles are topped with slices of chicken.

Palembang is separated by Musi River. To reach Jakabaring City Stadium, you’ll need to cross Ampera Bridge. The city area is called Seberang Ilir. Meanwhile, Jakabaring is situated in Seberang Ulu.
Most of the city’s tourist attractions are located in the Ilir area, such as Benteng Kuto Besak, Monpera and the newly built Goedang Boencit, famous for its various murals. However, if you chose to stay in the Seberang Ulu are, fret not as the city administrations has developed several tourist attractions, namely Kampung Kapitan, Kampung Arab and Cheng Hoo Mosque.
Kampung Kapitan and Kampung Arab are located near Musi River. The former was once a residential area for people of Chinese descent and visitors can learn about the community’s history in Palembang at two heritage houses. The entrance fee is Rp 5,000 per person.
Meanwhile, Kampung Arab is still a residential area for communities of Arabic descent. Here, visitors can see the influences of Arab architecture in the houses. Both Kampungs are hidden inside the Ulu area, hence, it is suggested to rent a car or local guide for your visit.
Meanwhile, Cheng Hoo Mosque was built to honor Admiral Zheng He, a Muslim of Chinese descent. The mosque boasts a Chinese architectural design that is unique and worth viewing.
Meanwhile, Palembang Bird Park is located near the Opi Mall. It may be considered small for a petting zoo, but it is still worth the visit. An entrance fee of Rp 50,000 per person allows visitors to feed the park’s birds and iguanas.

There are many shopping centers in Seberang Ilir, such as Palembang Square (PS) and Palembang Indah Mall (PIM). However, the two closest to Jakabaring Stadium are Lippo Plaza Jakabaring and OPI Mall.
Lippo Plaza Jakabaring is located right in front of the sport complex. It has a supermarket, making it convenient for last-minute grocery shopping. Meanwhile, Opi Mall is a 15-minute walk from Jakabaring Sport City and boasts restaurants, a convention center, futsal stadium and a water park.

Ampera Bridge that connects Ulu and Ilir is the main landmark of Palembang. Those who want to go to Jakabaring Stadium will need to cross the bridge.

The big hospitals, such as Siloam Hospital, Charitas Hospital and Hermina, are located near the city center. A 24-hour Gleneagles Clinic is now open next to Lippo Mall in Jakabaring City Stadium.

The light rail transit (LRT) system is set to be operational in time for the Asian Games. Visitors can take an LRT train from Sultan Mahmud Badaruddin II Airport to Jakabaring Station. The city plans to sell LRT tickets at between Rp 5,000 and Rp 10,000.
However, it is suggested to download ride-hailing apps, such as Go-Jek and Grab, to explore every nook and cranny of Palembang by ojek (motorcycle taxi).

It is quite a task to find a money changer in Palembang. Those who bring foreign currency are recommended to go to Remaja Money Changer on Jl. Jenderal Sudirman, which is open from 9 a.m. to 4 p.m.

For security reasons, 24-hour convenience stores are only located in the city center. A 24-hour Indomaret can be found on Jl. Jenderal Sudirman.

Palembang has various emergency numbers, including 110 for the police, 113 for fire emergencies and 0711-354088 for ambulance services.